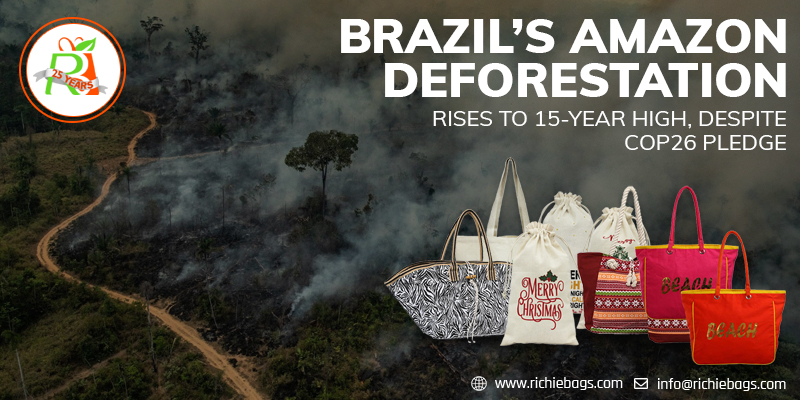 Deforestation in Brazil has soared to 22%, the highest level since 2006, the annual report of the government has shown. Amazon Rainforest’s deforestation has increased in October from last year, according to satellite data. The surging destruction comes despite the Brazilian President Jair Bolsonaro’s climate promise that Brazil is curbing illegal logging.

The National Institute for Space Research’s PRODES monitoring system has showed that 13,235 square kilometers of rainforest has disappeared between August 2020 and July 2021. This has been the worst annual loss ever since 2006, when the Amazon Rainforest shed more than 8,800 square miles. Dated October 27, the new statistics has driven environmental organizations like Greenpeace to accuse the Brazilian government of trying to clean up its image during the crucial talks.

According to Greenpeace, the renowned environmental advocacy group, approximately 1 million indigenous people as well as 3 million species of animals and plants live in Amazon. In a press statement, the group said, “”There is no amount of greenwashing that can hide what [President Jair] Bolsonaro is doing to destroy the Amazon. If anyone believed Bolsonaro’s government’s empty promises at COP, the truth is in these numbers. Unlike Bolsonaro, the satellites don’t lie.“

Why Has Deforestation Been On The Rise Since 2012?

Brazil’s deforestation has been soaring high since 2012 owing to the constant increase in forces driving loss of forest, a rising population, more roads giving access to the forest, and more investment. Also, the indirect effect of soy expansion has played an integral role, with soy planters buying cattle ranches not only in the previous Amazon forest, but also in Cerrado savanna area. Ranchers utilize the money from the land sales to buy cheaper land in Amazon North where they clear the rainforest on a large scale to establish new ranches.

A Vow To Stop Deforestation?

Brazil was among numerous nations, including the United States, China, and Russia, who pledged to stop and reverse deforestation by 2030 at COP26 in Glasgow. It’s a landmark agreement encompassing around 85% of the forests worldwide.

Even though the Brazilian President didn’t attend the United Nations climate summit in Glasgow, his nation joined other countries in agreeing to halt illegal deforestation, besides promising to reduce methane emissions. People worldwide are incorporating sustainable practices like eco-friendly bags and Brazilians should not be left behind.

At the COP26, Brazil tried suggesting that the country has stepped up stewardship of the Amazon Rainforest, pledging to end illegal deforestation by 2028 – two years earlier than a previous target. However, scientists, activists, diplomats believe such promises mean little as deforestation has been soaring under Bolsonaro government.

Ane Alencar, science director at Amazon Environmental Research Institute, at COP26 in Glasgow, said: “Government announcements are not changing the reality that Brazil is continuing to lose forests.” Alencar added, “The world knows where Brazil stands and this attempt to display a different Brazil is unconvincing, because satellite data clearly shows the reality.”

The Amazon Rainforest plays a vital role in mitigating climate change. However, Bolsonaro is primarily concerned with the economic possibilities. Under his leadership, land protections have loosened and various environmental authorities have been defunded.