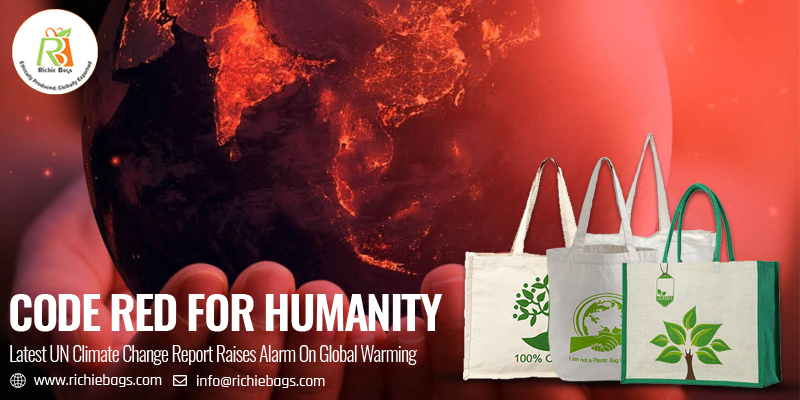 The world is on a dire climate path now and the long commitments made by governments worldwide to reduce greenhouse gas emissions are still insufficient to stop dangerous warming. A new UN climate report predicts the global climate crisis is inevitable, unprecedented, and irreversible. Scientists have warned that greenhouse gas levels in the atmosphere are high enough to guarantee climate disruption for the decades, if not centuries.

On August 9, 2021, the Intergovernmental Panel on Climate Change (IPCC) published its latest findings, describing how humans have changed the environment at an “unprecedented” pace and detailing how catastrophic impacts lie ahead unless greenhouse gas emissions are reduced rapidly and dramatically. The major scientific study has concluded: “It is unequivocal that human influence has warmed the atmosphere, oceans and land”.

In a landmark study, the U.N. climate panel has said that global warming is dangerously close to spiraling out of control, warning the world is already certain to face further climate disruptions. With wildfires, severe flooding, and heat waves continuing worldwide, the UN’s Intergovernmental Panel on Climate Change report warns of irreversible effects of climate change for the planet.

Describing the new UN report as a “code red for humanity”, the UN Secretary-General Antonio Guterres has urged an immediate end to coal energy and other high-polluting fossil fuels. “The alarm bells are deafening, and the evidence is irrefutable:  greenhouse gas emissions from fossil fuel burning and deforestation are choking our planet and putting billions of people at immediate risk”, the Secretary-General said in a statement.

According to the new report by the IPCC Working Group 1, scientists are observing changes in the Earth’s climate in every region and across the whole climate system. Many of the climate changes observed are unprecedented in thousands of years, and some of the changes that are already set in motion – like continued sea-level rise – are irreversible over hundreds to thousands of years.

The IPCC report, compiled by over 230 climate scientists, warns that major climate disruption is inevitable and, in many instances, irreversible. Drawing on more than 14,000 scientific studies, the IPCC report gives the most detailed and comprehensive picture of how climate change is changing the natural world – and what the future lies ahead.

This report arrives just three months prior to a major UN conference in Glasgow, Scotland, where world leaders will face mounting pressure to pledge ambitious climate action. And, with climate disasters and extreme weather increasing in frequency, this year’s United Nations climate change in Glasgow is very important. So far, the pledges to reduce emissions are nowhere near enough to start decreasing the level of greenhouse gases – mainly CO2 from burning fossil fuels that are accumulated in the atmosphere.

Ever since the report was published, campaigners and governments have been reacting to the findings with alarm.

U.S. President Joe Biden tweeted: “We can’t wait to tackle the climate crisis. The signs are unmistakable. The science is undeniable. And the cost of inaction keeps mounting.”

British Prime Minister Boris Johnson said that he hopes the report would be “a wake-up call for the world to take action now, before we meet in Glasgow.” In a statement, he said, “We know what must be done to limit global warming – consign coal to history and shift to clean energy sources, protect nature and provide climate finance for countries on the front line.”

Swedish activist Greta Thunberg said that the long-awaited report contained “no real surprises”. She stated: “It confirms what we already know from thousands of previous studies and reports – we are in an emergency”.

Climate Doom – What Can Be Done?

Dire predictions do not have to result in dire outcomes.

While the new UN report is more clear and confident about the downsides to global warming, scientists are more hopeful that if global emissions can be cut in half by 2030 and reach net zero by the middle of this century, we can be successful in halting and possibly reversing the rise in temperatures.

The UN Secretary-General says the solution is clear:

“This report must sound a death knell for coal and fossil fuels, before they destroy our planet… Countries should also end all new fossil fuel exploration and production, and shift fossil fuel subsidies into renewable energy.  By 2030, solar and wind capacity should quadruple and renewable energy investments should triple to maintain a net zero trajectory by mid-century.”

“If we combine forces now, we can avert climate catastrophe.  But, as today’s report makes clear, there is no time for delay and no room for excuses.  I count on government leaders and all stakeholders to ensure COP26 is a success.”

No one is safe from the consequences of climate change. Actions today can make the difference between the catastrophic effects of 4 degrees of global warming, like deadly heat waves, dramatically increased floods, and a hot yet less devastating temperature increase of 1.5 C. Every bit of warming matters in terms of creating outcomes that are different. And that denotes a cooler, safer future is still within our grasp.