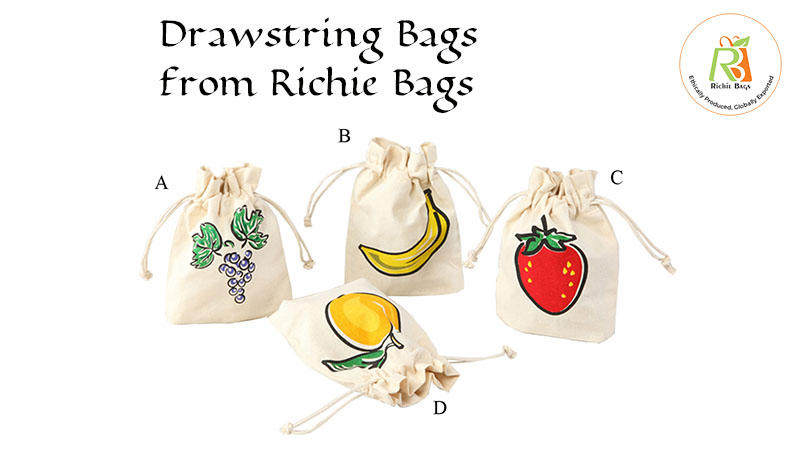 Drawstring Bags reinvented by Richie Bags, globally recognized manufacturer and exporter of eco-friendly fashionable jute/cotton handbags are a contemporary addition to the fashion world. However, research reveals that drawstring bags have been around since ages and have been used by both men and women for multiple purposes. Bags have been in customary use as far back as the days of the legendary Queen Cleopatra who carried a drawstring bag that contained her vial of deadly poison, while hieroglyphs depict men with bags tied around their waist with strings made of dried animal guts, resembling modern day drawstring bag.

Why; even the Bible mentions pouches, especially Judas Iscariot, carrying one around, containing his personal items. In 14th century, people wary of thieves and pickpockets very much used drawstring bags for carrying their money in safe and secured way.

Women, in the olden days, wore more ornate drawstring bags, often called Hamondeys or Tasques, to demonstrate their social status, while those used during the 14th century evolved into Wedding Gifts from groom to the bride. Most of these medieval pouch-like drawstring bags were embroidered, sometimes with depictions of love stories or ballads. These, however, later evolved into what were known as Chaneries that were used for storing rage inducing food for falcons or similar birds of prey.

According to Yolanda VandeKrol of the University of Delaware, ‘pockets’ were more common with women from the end of the 17th century until around 1800, when the neoclassical dress styles (high waist and clingy lines) made wearing interior pockets almost impossible. Dresses with hoops or bustles more easily accommodated pockets, while during the early 1800, ‘pockets’ were replaced by drawstring bags called reticules.

A drawstring (draw string or draw-string) is a string, cord, lace, or rope used to ‘draw’ (gather, collate or shorten) cloth, fabric or similar material. The ends of drawstring can be tied to hold it in place (and/or close an opening). Alternatively, the drawstring may be kept drawn, using a cordlock. Customarily, the drawstring is loose when not being used, and tightened when needed during use.

Drawstring bags made and marketed by RICHIE BAGS

Fabulously designed and skillfully crafted Drawstring Bags made and marketed by Richie Bags are eco-friendly, biodegradable and totally harmless jute/cotton product, as compared to their plastic equivalents that pollute our environments massively. When empty, these may appear diminutive, but wonder of wonders, they can carry amazing quantity of personal items that include a wide array of cosmetic products, wrist watches, costume jewelry and many more. Additionally, the strings are exceptionally strong and tough, rendering strength and sturdiness to the bag. What’s more, they are trendy in looks and are easier to carry. Grab a Richie Bags Drawstring Bag today, put all your belongings and go for a picnic.