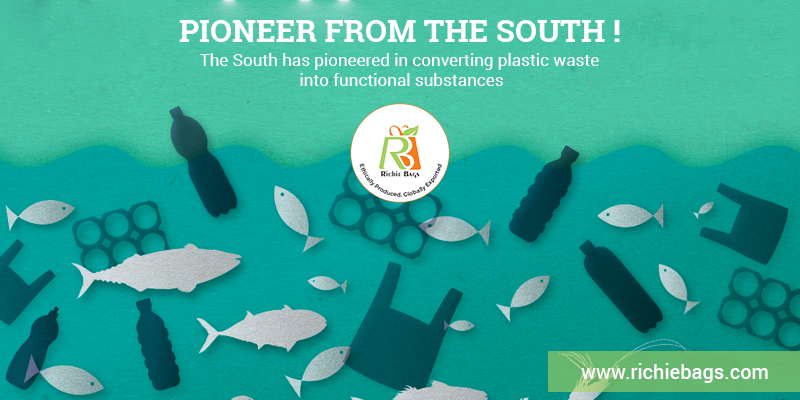 The South has Pioneered in Converting Plastic Waste into Functional Substances

Although the evils of plastic waste was first brought to the notice of others by a Kolkata manufacturer and overseas exporter of biodegradable jute carry bags Richie Bags & Fashions P. Ltd more than a decade ago,  treatment of such waste materials have mostly been made in Southern India.

To begin with, it was 73 year old retired professor of Chemistry from the Thiagarajar Engineering College, Madurai, Rajagoplan Vasudevan, known as the “Plastic Man of India” who devised the technique of turning plastic waste into road building component. Vasudevan, who was awarded PadmaShri for his epoch making invention made use of plastic carry bags, plastic cups and saucers, plastic packaging for potato chips and such similar waste materials.

In 2002, Vasudevan first thought of spraying dry, shredded plastic waste, made up of pieces as small as 2 mm in size, over gravel or bitumen heated to 170 degrees Celsius. As a result, the plastic melted and coated the stones with a thin film. The plastic-coated stones were subsequently added to molten tar. Since both plastic and tar are petroleum products, they mix up well. The Plastic Man of India first tried out this technique to pave a road on the college campus which yielded satisfactory result, thus creating means of good use of plastic waste on one hand and creating good roads on the other

Now the students of the Indian Institute of Technology, Madras have come up with a new technology that transforms plastic waste into furnace oil.

The five-member Team ENVIRO, which included a student from SSN College of Engineering, has developed a mobile solar-powered Pyrolysis unit hat can convert plastic into oil. A kilogram of plastic can produce 500 to 700 ml of oil, depending on the quality of plastic used, the team said.

To conduct experiments, the team procured plastic waste from the Chennai Corporation Garbage Sorting Centre in Velachery. “If we use virgin plastic of good quality, we can get as much as 800 ml of fuel oil. But the plastic we get from the sorting centre is often soiled and so the quantity of oil is less,” said K. Sivagami, a team member.

Conversion Process is Quite Fast

According to the team members, the fuel oil can be used in generators, motor boats and irrigation pump sets, while it takes less than 90 minutes from the time the plastic waste is fed into the Pyrolysis unit to the time it is converted into oil. The unit, however, can currently process only 5 kg of plastic at a time.

“Large-scale Pyrolysis units have been unsuccessful due to issues like transporting plastic waste. We have therefore designed a mobile, transportable unit that can be installed in Sorting Centers at the ward or zonal garbage segregation Centers,” said G. Divya Priya, a post-doctoral research scholar involved in the project.

The Residue is also Used Effectively

The residue (sludge) generated during the burning process is compressed and made into light charcoal briquettes, which can be reused to run the unit. The briquettes can also be used to power medium and small-scale industrial units, said team mentor Indumathi M. Nambi, professor, Environmental and Water Resources Engineering Division.

While the innovative process was demonstrated at the UN World Environmental Day Exhibition held in New Delhi earlier this year suitably,  it helped win the team the most coveted Innovation Excellence Award  as also Funding to nurture a start-up at the Institute’s Research Park. At the same time, several NGOs as well as Community-level organizations have approached the team for negotiations. So also have Chennai and Thoothukudi Corporations.