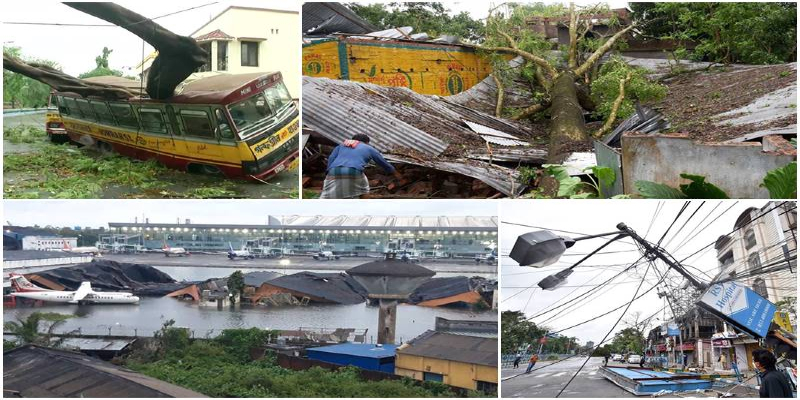 The Bay of Bengal has long been the favourable breeding ground of tropical cyclones. On 19th May 2020, a super cyclone barrelled up the Bay of Bengal, heading for a swampy street along the India-Bangladesh order. Amphan hit West Bengal and Odisha at the crisis time when countries worldwide are fighting the outbreak of COVID-19.

Categorized by the Indian Meteorologists as a tale of twin disasters, Amphan is considered equivalent to a Category 5 hurricane. The predictions made by India Meteorological Department (IMD) were almost accurate and the cyclonic spell followed the estimated path, thus giving authorities the time to plan quick evacuation, relief and response. The tidal waves and strong winds, coinciding with the high tides, caused severe damage to embankments, buildings, trees, roads, crops, etc.

Ever since 1999, Amphan is the strongest storm to be recorded in the Bay of Bengal. The gusty winds, heavy rain battered the eastern Indian states of West Bengal and Odisha causing heavy destruction. As a result of the heavy winds during the cyclonic spell, thousands of trees were uprooted and roofs of numerous houses collapsed. West Bengal Chief Minister Mamata Banerjee recently said that the impact of Amphan is “worse than coronavirus”.

The conjunction of two of the most fatal disasters – Coronavirus and Amphan – and the recovery effortsfacing administrators is emphasized by a narrow lane at crossing points in Kolkata. While the entrance is blocked since it’s a COVID hotspot and containment zone. However, it is also engrossed in flood waters that came with the cyclone.Many scientists believe that climate change and warmer temperatures are making these storms even worse.

On Twitter, actress MahhiVij shared, “Crisis after crisis and this just doesn’t seem to end. These are literally uncertain and helpless situations we are all sadly going through. #SuperCycloneAmphan has made us all wonder what more 2020 has in store for us.”

Local news networks in West Bengal showed uprooted traffic lights in flooded streets and river jetties torn apart and vehicles crushed under the uprooted trees. Apartment buildings seemed to be swaying from one side to another, mimicking an earthquake. While parts of Kolkata were submerged after the storm, there has been widespread destruction in several areas. With lakhs of people rendered homeless in half-a-dozen districts of the state, gusty winds blew away flattened kutcha houses, shanties, uprooted trees and electric poles.

In the eastern Indian state of Odisha, authorities have fewer shelters to work with since most of these places have been turned into quarantine centers for COVID 19 patients. Currently, Indian officials are struggling to evacuate people and prepare for destruction while they are still under partial lockdown to combat coronavirus. However, humanitarian officials are concerned that by keeping people into shelters, coronavirus infections can spread further.

The takeaways of the cyclone are that states must have the capacity as well as resources for handling twin disasters simultaneously. The recent climate changes indicate that with the increase of extreme weather phenomenon in frequency over the past two decades, concurrent calamities must be factored in. Preparations need empowering grassroots level administration, people as well as framework.

Lessons To Be Learnt

NDRF Chief SN Pradhan said, “Amphan timely lesson for states to modernise infrastructure and focus on disaster governance.” He further added that such dangerous natural events are going to be much more frequent with the changing climate and the only way to save more lives is through disaster-resilient infrastructure, particularly in the coastal belts. Another major requirement is underground electrification in both coastal and rural locations.

Under a climate change world, the super cyclones and pandemics have become inevitable. The director general further stated that the pandemic compounded the challenges of moving people to safety and saving lives as the cyclone battered through the eastern Indian states of West Bengal and Odisha.

One cannot compromise on disaster governance at any cost. It is high time state government must consider it as a regulationand not an exception. It is important to have fully trained crisis management team and take adequate preparations before cyclone strikes.