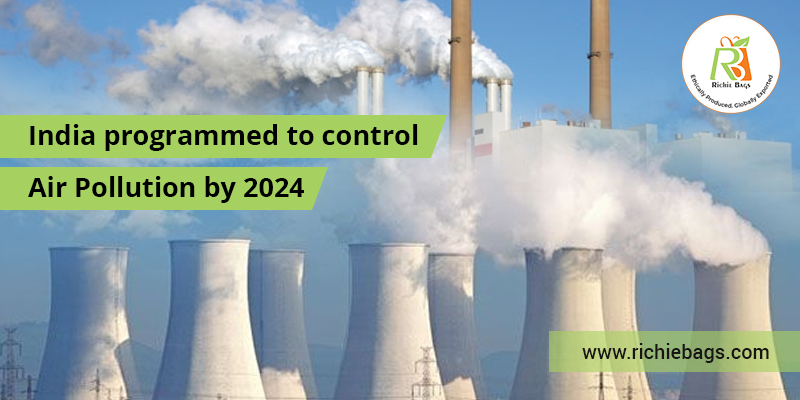 Next to Plastic Pollution, against which Richie Bags and Fashions P. Ltd, leading manufacturer/exporter of biodegradable, eco-friendly jute/cotton carry bags has waged a decade long battle now finds an even bigger challenge in the form of Air Pollution that needs to be fought at government level. The situation meanwhile has deteriorated to extreme level as may be surmised from the following paragraphs.

According to WHO (World Health Organization) Global Air Pollution database recently released in Geneva, India has 14 out of the 15 most polluted cities in the world in terms of PM 2.5 concentrations — the worst being Kanpur with a PM 2.5 concentration of 173 micrograms per cubic meter, followed by Faridabad, Varanasi and Gaya.

[Incidentally, PM that stands for Particulate Matter, also known as particle pollution, is a complex mixture of air-borne particles and liquid droplets composed of acids (such as nitrates and sulfates), ammonium, water, black (or “elemental”) carbon, organic chemicals, metals, and soil (crustal) material.]

The situation down South isn’t any better either – air quality in cities in south India like Thiruvananthapuram, Chikkaballapur and Tirupati are getting from bad to worse with every passing day.

Apart from metropolitan cities mentioned above that suffer most due to high concentration of polluted air, lower levels of air borne pollutants can harm the health of people living in smaller cities too. As a matter of fact, the Central Pollution Control Board (CPCB) is of the opinion that poor air quality, often recorded in minor Indian cities has far reaching effects on women, children and senior citizens.

NCAP Has Come To The Forefront To Curb Air Pollution

However, in an all out effort to resolve the issue, the National Clean Air Program (NCAP), under the Environment Ministry, Government of India has outlined a project to reduce air pollution in 102 worse-affected cities in the country to around 20 to 30 percent by 2024, exceedingly anticipating that state governments and NGOs will cooperate with them.

While senior environment officials were keeping their fingers crossed on the proposed 20 -30 percent reductions in miniscule inhalable PM by 20124 from their 2017 level, the ministry officials remained most enthusiastic about the project. “These are tough targets — but we believe they are achievable if we do this well,” said environment secretary Chandra Kishore Mishra after Union Environment Minister Harsh Vardhan released the document that describes the National Clean Air Program (NCAP).“We hope this will be a guiding document, a guiding force for all those who join the activities,” Vardhan added.

To start with, the NCAP will concentrate on 102 cities that include Ahmadabad, Bangalore, Calcutta, Delhi, Gwalior, Kanpur, Lucknow, Mumbai and Patna, where the air quality, measured through PM levels, has been persistently below permissible limits.

The project envisage multiple actions and their timelines for central ministries, states and city-level agencies in order to curb vehicular, industrial and thermal power emissions and reduce the air pollution from the burning of crop residue (a recent enactment in Uttar Pradesh has confirmed this issue) burning of scrub in areas adjacent to forests, brick kilns, construction and related activities. While some actions have already started, others are due for immediate implementation, to end up  by 2024.

So far as air pollution from vehicle emission is concerned, the Delhi Administration has already taken steps to curb it by the Odd-Even Vehicle Rule that proves quite effective in reducing the capital’s high level of air pollution.

According to this new rule, private vehicles will be allowed to run across the city based on their registration numbers. For example, if a vehicle’s registration number ends with an odd digit, it will be allowed on the road on January 1, while that ending with an even number can be driven on the second, and so on. This scheme was first introduced in Beijing prior to the 2008 Olympics. While the rule was initially said to be provisional, it turned out to be so effective that the government later made it permanent. Similar road-rationing rules are in force in many places around the world like Paris, Mexico and Bogota to curb road jams and pollution.

The air-pollution monitoring network, however, will eventually be extended to cover 1,500 stations nationwide by 2024. City authorities, meanwhile have been repeatedly requested to introduce mechanized sweeping facilities (already implemented in most of the capital cities) and plant vegetation filters along roads and highways, while agricultural departments have been asked to expand actions to curb the burning of crop residues (some states have already enforced laws to curb it).

Let us face the fact- air pollution is not restricted to one city or a particular country. It’s almost a global phenomenon. But the saddest part of it lies somewhere else. Although India and China had hit the headlines for harboring the deadliest air pollution, the latter has managed to reduce  PM2.5 levels by enforcing rigid rules, the former is still in its cradle.