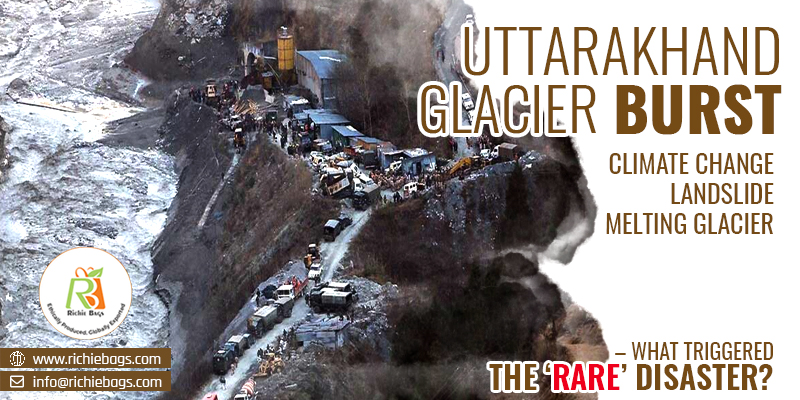 On Sunday, February 7, 2021, disaster struck Uttarakhand’s Chamoli district in the form of an avalanche and deluge after a portion of the Nanda Devi glacier broke off. It caused massive flooding and swept away hydroelectric dams, bridges, houses and everything that came on its way. The incident triggered large-scale devastation and widespread panic in the high mountain areas.

As the glacier burst triggered massive floods in the Alaknanda, Rishi Ganga, and Dhauli Ganga rivers and surged down the valley, they caused extensive damage to two hydropower projects. NTPC’s Tapovan-Vishnugad Hydel project and the Rishi Ganga Hydel Project – were severely damaged with scores of workers trapped in the tunnels as the waters came rushing in. It is feared that at least 32 people are dead and more than 190 are missing.

The sudden increase in the water levels of the Alaknanda and Dhauli Ganga rivers was triggered by a rapid influx of materials like glacial water, ice sheets, rocks and/or other debris, from the Nanda Devi glacier. However, the exact reason behind the disaster is yet to be determined as debates continue among the experts.

Amid this, Dr. Ranjit Rath, Director-General of the Geological Survey of India (GSI) has said that the glaciers in the Himalayas are retreating under climate change scenario – a global phenomenon. While speaking to the reporters, he said, “Once the water level recedes a team of experts will assess the damage as well as the triggering factor responsible for the outburst.”

Experts believe the breach in the glacial lake could have been triggered by numerous factors. Read on to know more.

Early pieces of evidence showed that a rare incident of glacial burst had triggered the disaster, which could be linked to climate change. But, it should be noted that the satellite images did not show any glacial lake near the region. Therefore, this theory has been contested by several experts.

In the Himalayan region, glacial lakes are a well-known hazard with thousands of fragile lakes being identified in the region. When these lakes are breached, they release large amounts of water, inundating the unsuspecting settlements downstream. And, with climate change adding to the increased risk year after year, it’s time Uttarakhand chooses an eco-friendly way to development.

Although experts say that it is too early to conclude exactly what caused the avalanche, they have said that human-induced global warming is certainly at play. Research Director at Indian School of Business’ Bharti Institute of Public Policy, Dr. Ankal Prakash said, “It looks like a climate change event.” Author on the UN Intergovernmental Panel on Climate Change’ landmark report on the ocean and Cryosphere, Prakash said, “The prima facie evidence we are seeing is that it’s because of the glacial decline and melting because of global warming.”

Landslide – A Likely Cause

Dr. Dan Shugar, Associate Professor at the University of Calgary in Canada, had first hinted at landslides as a likely cause behind the disaster. By using the satellite images from Google Earth and the Planet Labs, Dr. Shugar assumed that a landslide from the steep hanging glacier might have been the cause.

Later, in a blog, Dr. Dave Petley from the University Of Sheffield, UK, confirmed that it is the landslide that triggered the ice and rock avalanche that led to the flash floods. So, calling the disaster only a glacier outburst might be misleading.

Experts believe this disaster could be linked to global warming and a team of scientists was flown to the site for investing exactly what happened. Dwarika Dobal, a geologist from the Wadia Institute of Himalayan Geology said “climate change will make these events even more common.”

High temperatures coupled with less snowfall can accelerate melting that can cause water to rise to dangerous levels. Associate Scientist Sarah Das, at the Woods Hole Oceanographic Institution, said, “Most mountain glaciers around the world were much larger in the past and have been melting and shrinking dramatically due to climate change and global warming.”

Although the actual cause of the disaster is still being probed by the experts, scientists worldwide have warned for long that glaciers are disappearing from the Earth gradually and global warming is a major reason behind the world getting hotter since ice caps on mountains are melting down rapidly.

Some top scientists believe that neither a glacial lake burst nor an avalanche or a landslide could explain the peculiar nature of Uttarakhand’s deadly floods. They are perplexed about how a glacial can break in the cold winter month of February?

Dr. Azam has said, “Climate change driven erratic weather patterns like increased snowfall and rainfall, warmer winters has led to the melting point of a lot of snow. The thermal profile of ice is increasing, where earlier the temperature of ice ranged from -6 to -20 degree C, it is now -2, making it more susceptible to melting.”

A team of DRDO has been flown in for surveillance and reconnaissance in the region. Also, experts have been assigned with the task of determining the exact cause behind the disaster. For now, the role of climate change in exacerbating such deadly natural hazards seems to be the only possibility a majority of scientists agree on.

Meanwhile, the construction of a couple of dams on the Dhauli Ganga and Rishi Ganga rivers has also come under the scanner for affecting the ecological balance. Experts opine that the need for eco-friendly construction and infrastructure is real. So, in the future, discussions must focus on what kind of projects are built and it should be assessed how damaging they could be to the environment at large.

Apart from Bags, check out the various kinds of products we make from Jute and Cotton .

As a manufacturer and exporter of cotton and jute

Mother Nature has given us our second opportunity