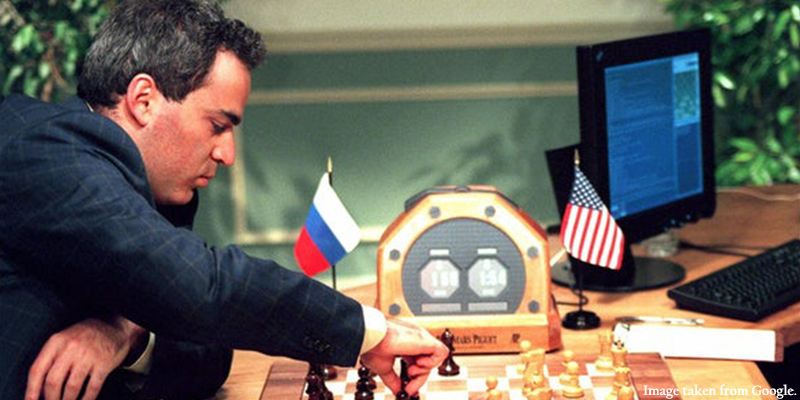 On Sunday, May 11, 1997, the then-reigning world chess champion Garry Kasparov was defeated in an unexpected victory of machine over man. Deep Blue – a chess-playing supercomputer developed by IBM, made history as the first-ever computer to beat a Grandmaster in a six-game match. It was a depressing day for humankind in general and started a new era of machine mastery over humans.

Speaking about his loss 23 years ago, Kasparov recently said, “I’ve made my peace with it. At the end of the day, the match was not a curse but a blessing, because I was a part of something very important.” He further added, “1997 was an unpleasant experience, but it helped me understand the future of human-machine collaboration.”

In 2016, history repeated itself when AlphaGo beat Sedol. Just like Kasparov, Shedol too was shocked at his loss. When retiring from competitive Go play in 2019, he cited the fact that even if he becomes the World No.1 player once again, artificial intelligence is “an entity that cannot be defeated.”

Garry Kasparov – the greatest Chess player of the world, had a reputation terrifying enough to put his opponents on the edge. He knew exactly how to intimidate his competitors.

Particularly, there was one unnerving trick which his opponents had come to dread. As they sat sweating through a difficult game, Kasparov would pick up his watch casually from where it lay beside the chessboard and put it back in his chest. It indicated that he was bored with toying his rival.

But when Deep Blue faced him in the famous match of May 1997, the supercomputer was unsusceptible to such tactics. Although everyone knows the outcome of the match, the story behind how the computer won is less appreciated. This symbolic victory of machines over humans which marked the beginning of the algorithmic age was down to much more than sheer computing power.

To beat Kasparov, the computer had to understand him not only as a very efficient processor of excellent chess moves, but also as a human being.

Machines A No Match For Human Intelligence

Even though Garry was unhappy at being defeated, he took comfort too. He said, “Deep Blue was still a number-crunching machine, [assessing] 200 million positions per second, but it couldn’t unlock the secrets of human intelligence.”

The former world champion believes that while man makes choices, machines can only make decisions. He said, “When a machine makes a decision, it uses computation to go all the way down. Choice is human because to make the right choice we have to understand what matters and why it does: as individuals, as companies, as societies.”

Furthermore, he said, “If we envision a bright future, we can do more, we can invest more. And we can dream. That is the one thing that only humans can do.”

Kasparov On What Lies Ahead

During a recent interview with Wired, Kasparov was asked about the message he would want to give people regarding the impact of artificial intelligence. He said, “Every technology destroys jobs before creating jobs. When you look at the statistics, only 4 percent of jobs in the US require human creativity. That means 96 percent of jobs, I call them zombie jobs. They’re dead, they just don’t know it.”

Speaking about the outcry of artificial intelligence taking over human lives, he said,”I always say I was the first knowledge worker whose job was threatened.” Even though he admitted that certain jobs are in danger, he believes that humans need to seek opportunities to create new jobs which will emphasise their strengths.

History tells that automation always destroys jobs and creates new ones. When asked about his advice to people who have to contest with AI for their jobs, he said, “With AlphaZero and future machines, I describe the human role as being shepherds. You just have to nudge the flock of intelligent algorithms.”

Garry Kasparov believes that people must “treat AI as a tool” which will augment the decision making of humans. No one has seen the future, but there’s a possibility that humans and machines together might just be the future of artificial intelligence.