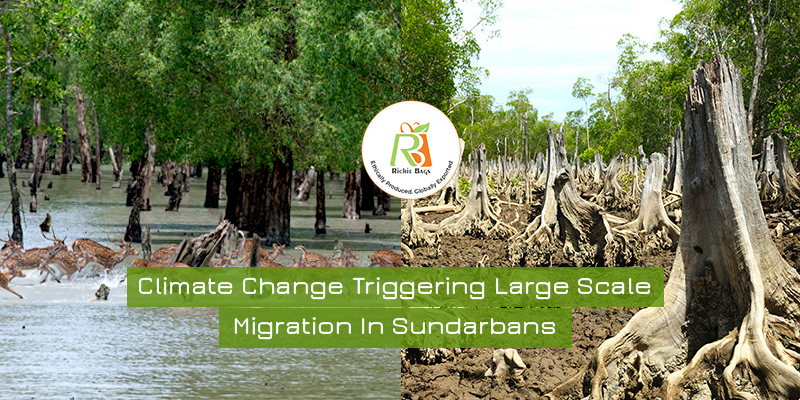 Along with ecological experts, the sponsors of Richie Bags and Fashions P. Ltd, dedicated protector of our lonely planet against plastic and sundry other pollutions agree that people in Sundarbans have started migrating towards cities with ever increasing vulnerability due to climate change and fast dwindling opportunities of livelihood.

“People from Indian part of Sundarbans as well as Bangladesh, have already started migrating towards north but in a smaller number. That is why this migration was not noticed yet. Salinity is causing health problems and because of climate change, bio-diversity and quantum of fish is dropping. Opportunities are going down, conservationist Bittu Sahgal said.

He also said that every square millimeter of the Sundarbans has some function, but people are changing the function of the delta. “When you are trying to fight with nature and not understanding that the nature is not going to give you any judgment, it will only give you consequences,” Sahgal said at Tata Steel Kolkata Literary Meet.

Heart Of The Matter

In 2000, when I started working on the Sundarbans, says Amitava Ghosh as a prelude to his epic novel  Gun Island  (Best selling Cultural Heritage Fiction) , it was clear that the area was very adversely affected by climate change — sea level rise, salt water intrusion…. Things accelerated after Cyclone Aila in 2009 and many people had to leave.”

Sharing his experience at the delta, particularly when the cyclone ‘Aila’ hit Sundarbans in 2009, conservationist and writer Bikram Grewal said, “…where they (people) have cut mangroves, those parts have gone with people and houses… the forest was untouched because we left it untouched. “When we start interfering with nature, the problem starts,” he added.

Invasion Of Technology Adds To The Cause

Ghosh , meanwhile drew attention to the invasion of technology in our lives which contributed to the migration. “The most profound effect is disruption of local ties. A boy in a village — be he Bengali, African, Arabic or Pakistani — has access to Internet and social media through which images of life elsewhere flash before his eyes, planting a fantasy in his head. On the other hand, his land itself is collapsing, getting saturated with salt. Of course, poverty creates a reason for escape but not all of it is rational.”

Once they migrate, they want to earn some money and go home. But there is no pot of gold at the end of the rainbow. They lead terrible lives, as terrible in California or Venice as in the Sundarbans.

Yet they cannot return as their families had staked everything to pay for their passage and they would be deemed a failure if they did. “So there is a sense of shame and entrapment. The result is a sundering of ties with family, community and land. It’s a part of the vast destabilisation that we are seeing everywhere,” he added.

The celebrated author also pointed out that the Venetian lagoon looked startlingly like the Sundarbans from the sky. The similarity did not end there. “As I was walking around the streets of Venice, I could hear people talking in Bengali. The entire working class there comprises Bengalis — people who make pizzas, sell chestnuts, work in restaurants…. It was striking to see how they had managed to insert themselves into the sinews of this new world. It seemed you could make your way across Italy speaking Bengali!”

“The traffic between nations is not confined to the ordered passage through airports with passports, but involves the human turmoil precipitated by climate change,” he confessed.