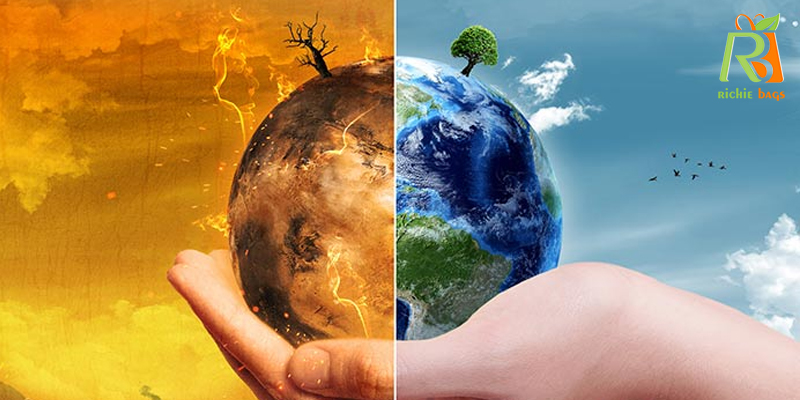 But before getting into the heart of the matter, it might be prudent to clarify what is climate change and how it affects us. Meanwhile, people all over the world have come to realize that climate change is one of the greatest threats that is facing our lonely planet and unless we do something to prevent it, the current civilization will soon go under the sea because of rise in sea water.

What precisely is climate change?

Evidence is quite clear that the climate is changing, while it has been scientifically proved that the earth is warming up, which again is human-induced. The following report available through governmental agencies [accessed Jun 19 2018] will throw further light on the issue :

The Fourth Assessment Report of the Intergovernmental Panel on Climate Change states that the warming of the climate system is unequivocal, as is now evident from observations of increases in global average air and ocean temperatures, widespread melting of snow and ice and rising global average sea level. The average global temperatures have increased by 0.74 Degree C in the 100 years’ period between 1906 and 2005. There are large regional and seasonal variations in these estimates. The all India monsoon rainfall for the country as a whole did not show any significant trend whereas significant and remarkable variations were found on regional and monthly scales. July rainfall has decreased for most parts of the central and peninsular India but increased significantly in the northeastern parts of the country whereas August rainfall has increased significantly over parts of central and western India. The trends in rainfall for monsoon season as a whole show both increasing and decreasing trends in different parts of the country. The mean annual temperature for the country as a whole has shown a trend of 0.56 degree celsius per 100 years. On the seasonal scale, the highest trend has been observed for the post-monsoon season (0.77 Deg. C/100 years) whereas the lowest trend was found for monsoon season (0.33 Deg. C/100 years). Climate change has become one of the most concerning issues in various spheres of human activities in view of its projected adverse impacts on different socio-economy sectors including agriculture and horticulture.

Studies have revealed that some gases within the atmosphere block heat from escaping and thus create global warming. This includes Carbon dioxide (CO2), Methane (CH4), Nitrous Oxide (N2O) which are called greenhouse gases, and a few more substances.

Out of these, Carbon dioxide is the key component that causes global warming/climate change. This gas is released by us through breathing, while a major portion of it was neutralized by plants.. But with large scale destruction of forests, this advantage has been withdrawn from the face of planet. CO2 is also produced by vehicles that consume fossil fuel such as petrol and diesel.

As for Methane, which is produced through natural resources as well as  human activities that include decomposition of wastes in landfills is yet another component responsible for global warming/climate change. When checked on molecule-for-molecule basis, methane has been found to be a far more active greenhouse gas as compared to Carbon dioxide.

Richie Bags and Fashions contributes towards halting climate change through its crusade against the use of plastic (single-use) carry bags. If, however, you feel curious to know the link between plastic carry bags and global warming/climate change you need to understand that plastic bags are made out of polyethylene, a byproduct of petroleum and natural gas. When allowed to rot, these release greenhouse gas emissions into the atmosphere, creating yet another component that triggers global warming/ climate change. Since Richie Bags and Fashions P. Ltd has been combating  against the use (and production ) of plastic bags for more than a decade, its contribution towards halting of hazardous climate change may be reckoned as crucial by many.

How can you contribute towards the same cause?

There are very many ways by which you may put a stop to global warming/climate change, a few of them being listed below.

Global warming is a real threat to life on the lonely planet. Each person, however small, should contribute towards halting this slow yet inevitable catastrophe. Although Richie Bags and Fashion P Ltd has taken up the issue on a corporate level, you may do it according to your own capacity.