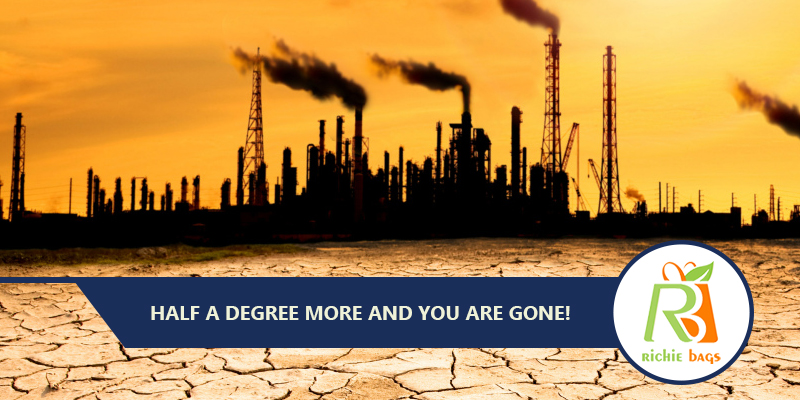 Limiting global warming to half a degree Celsius from now means the world can keep ‘a semblance’ of the ecosystem we have, says a UN report. Otherwise, as we can see, that semblance will be lost, resulting in total disaster.

Incidentally, the Nobel Prize-winning Intergovernmental Panel on Climate Change has also issued its ominous report at a meeting in Incheon, South Korea where it discussed how the Earth’s weather, health and ecosystems would find better conditions if the world leaders could somehow limit manmade global warming to just half degree Celsius from now, as against the universally agreed-upon goal of one degree Celsius.

Limiting warming to half degree Celsius means what?

Limiting warming to a half degree Celsius from now, as earlier mentioned, means the world can keep a resemblance of the ecosystems we have. However, adding another half degree on top of that — the looser global goal — essentially means a different and more challenging Earth for people and species, said another of the report’s lead authors, Ove Hoegh-Guldberg, director of the Global Change Institute at the University of Queensland, Australia.

But meeting the more ambitious goal of lesser warming requires immediate, sweeping cuts in emissions of heat-trapping gases as well as drastic changes in the energy field. While the UN panel says technically that’s possible, in reality, the chances appear slim.

Meanwhile, the planet has warmed 1 degree Celsius (since pre-industrial times), so the issue is about the difference of another half-degree Celsius from now. “There is no definitive way to limit global temperature rise to 1.5 above pre-industrial levels,” the UN-requested report said. More than 90 scientists wrote the report, which is based on more than 6,000 peer reviews. “Global warming is likely to reach 1.5 degrees Celsius between 2030 and 2052 if it continues to increase at the current rate,” the report states.

If, however, you delve deeper in the report, you are likely to observe that the  scientists are saying that less than 2 per cent of 529 of their calculated possible future scenarios kept warming below the 1.5 goal without the temperature going above that and somehow coming back down in the future.

The pledges nations made in the Paris agreement in 2015 are “clearly insufficient to limit warming to 1.5 in any way”, one of the study’s lead authors, Joerj Roeglj of the Imperial College in London, said.

“I just don’t see the possibility of doing the one and a half” and even 2 degrees looks unlikely, said Appalachian State University environmental scientist Gregg Marland, who isn’t part of the UN panel but has tracked global emissions for decades for the US Energy Department. He preferred the report to an academic exercise wondering what would happen if a frog had wings.

All said and done, the main issue remains unchanged – you cannot afford to allow the planet to go half a degree warmer above the newly stipulated range, come what may. Ban use of vehicles that run on fossil fuel, stop running of coal-fired electric generators (more than 60% of electricity in the central region of the United States comes from coal-fired electric generators – no wonder president trump came out of the Paris Agreement) and put an end to further progress of carbon footprint worldwide.