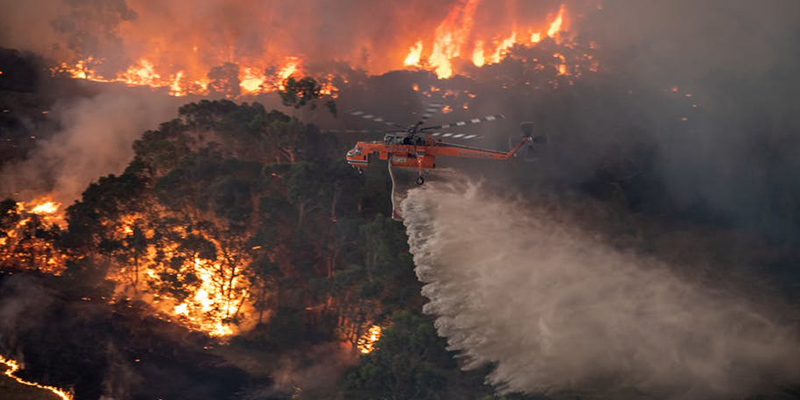 Fire tornadoes, orange sky, koalas on fire, baby kangaroos hanging on fence wires and petrified people being evacuated constantly. These are the images of Australia – a continent in flames since September 2019. The destructive wildfires have engulfed cities and communities, leaving thousands of people homeless.

Since time immemorial, bush fires have been common throughout Australia. The aborigines have used fire as their land management tool for over a thousand years. So, bushfires are an intrinsic part of Australia’s environment and the natural ecosystems have evolved with fire. However, Australia is now ravaged by the worst bushfires in the last decade. The massive bush fires are so devastating that they’ve been creating their own thunderstorms.

Prince Harry and Meghan Markle – the Royal Couple, asked their followers to consider spreading awareness to the ongoing crisis. Their official statement read “Our thoughts and prayers are with those across Australia who are continuing to face the devastating fires that have been raging for months.”

Let’s take a closer look at the catastrophic fires of Australia and the lessons the world should learn.

Forest fires have always been a part of the continent’s ecology. The eucalyptus forests here share a unique relationship with fire as the trees depend on fire for releasing their seeds. Some areas of the forests catch fire every year and are quelled either naturally or by firefighters. However, this year’s forest fires are unprecedented.

This time, the fire started earlier, spread very quickly and have continued uninterrupted so far. With 2019 being Australia’s driest and hottest year on record, even the weather conditions are historic till now. It is assumed that the extreme drought and heat added more fuel to fires.

Bindi Irwin- the Wildlife Warrior, opened up the Australian Zoo Hospital for helping wildlife affected by the fires. She took to Instagram and wrote, “With so many devastating fires within Australia, my heart breaks for the people and wildlife who have lost so much.”

Why Should The World Bother About Australian Bushfires?

Australia’s forest fires are a tell-tale sign of climate change. Extreme dryness, higher temperatures, below-the-average rainfall, lengthening fire seasons and rapid spread of bushfires fall exactly in the scenario which has been predicted for decades regarding climate models. Not only are these predictions true for Australia, but also for numerous other countries, including India.

Several parts of the world have conditions similar to what has set Australia burning. The Mediterranean, the United States’ west coast, South Africa and parts of Central Asia have a tendency for similar kind of firestorm. Even some regions of Central and South India have similar predispositions.

In 2018, California experienced one of the deadliest forest fires ever. More than 100 people died due to wildfires in Greece. During 2018 -2019, India too had experienced some of its worst forest fires. In fact, there is a clear indication of increasing forest fires in the southern and central states of India.

It is true that India isn’t likely to witness massive wildfire like Australia since forests here are significantly fragmented. However, intense forest fires – like those in Bandipur and Tehri can become widespread.

So, what exactly can be done to avoid such tragedies in the future?

Saving lives, ecosystems and properties isn’t possible with technological might. So, it’s time the world does everything possible to limiting global warming since this is the only way to avoid large-scale devastation.